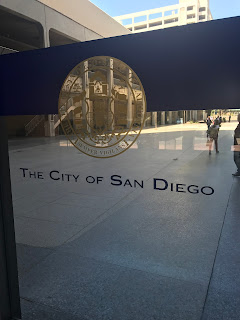 Yesterday was the long anticipated San Diego City Council meeting to discuss the city's position on licensing for adult use cannabis.  The official docket was to vote on the following:

Option 2 includes option 1 and also permits cultivation, distribution, and production of marijuana and marijuana products with approval of a Process Three Conditional Use Permit in light and heavy industrial zones. Marijuana production facilities will be limited to a maximum of two per City Council District. (Rev. 9/8/17) 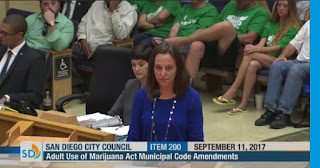 Suffice it to say that it was a well attended meeting.  There were close to 100 speakers from the general public with impassioned (some highly entertaining) voices on all sides of the discussion.  I decided to speak as a citizen in opposition, because I believe that both of the options are too restrictive.  Two of the main reasons I advocate for a more liberal policy are as follows:

1) Recreational users want access to this plant and medical patients need access to it.  They will get it one way or another.  If cannabis is not readily accessible through legal channels, the black market will continue to thrive.  Black market operators do not concern themselves with toxicity, public safety, preventing youth from access, avoiding harmful contaminants, safe packaging, or any other critically important considerations.  Black market operators also don't bother with sales or income tax for obvious reasons.

2) San Diego has already approved licensing for retail dispensary locations.  If the city does not allow for cultivation, manufacturing, and distribution, the retail operators will have zero access to a legal, local supply chain.  This means the retail shelves in San Diego will be stocked with (at best) legal product from other municipalities or (at worst) local black market product.  Neither of these will necessarily comply with the same health and safety standards that we will have in San Diego.

After well over 4 hours of discussion, the City Council voted 6-3 in favor of an amended version of Option 2.  The amendment expands the limit of 2 per district to a citywide cap of 40 total licenses.

I have to believe that the dozens of responsible, well-researched, and articulate public statements made in support of this liberalization played a role in yesterdays vote.

Video from the meeting can be found here: http://granicus.sandiego.gov/MediaPlayer.php?view_id=3&clip_id=7129

Popular posts from this blog

August 31, 2017
Which is your favorite reason #whyIcannabis? 1. Because I’m a contrarian and (not so) secretly love a good shock factor. 2. Because supply and demand (I’m an Economist). 3. Because I’m a worrier. 4. Because medicine is medicine. 5. Because I hate calories and hangovers. 6. Because botany is real. 7. Because no industry should have to operate in the Stone Age. 8. Because traditional business disciplines are necessary in every industry. 9. Because “vices” should be taxed and regulated.
4 comments
Read more

Mother of the Year? Not this year.

The Medical Marijuana Ad-hoc Committee was created by the City Council on April 19 to specifically address the possibility of new medical marijuana regulations for the City of Oceanside. All work will be completed within six months per City regulations regarding ad-hoc committees and the committee’s report will be presented to the City Council for review and possible action in November, 2017.

The meetings are open to the public, and typically feature a couple speakers, followed by questions from the committee and comments from the public.  I've attended a couple. The cultivator that I work with has been very active at these meetings and has made an incredibly positive impression on the Oceanside officials, as evidenced by the commissioner's request for a site visit and for the operator to speak at one of the committee meetings.

The most recent meeting was yesterday at 4:00.  I picked Riley (my 7 year old, first grade, daughter) up from schoo…
2 comments
Read more